How to impress a room full of VIP’s? 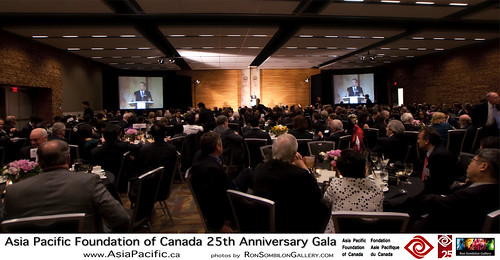 It was late in the evening one cold night last December, Amy was taking pictures of an arrangement we had to deliver the next day and a customer walked in the door to buy an orchid. She really liked the floral arrangement and said to Amy, “Aww, I wish I received those flowers!”

She asked if we did events, we said that’s what we love designing for events and the next thing you know, we were now involved with an exciting and prestigious event. The Asia Pacific Foundation of Canada’s 25th Anniversary Gala. Guests include Premier Gordon Campbell, politicians Stockwell Day and John Reynolds, top Canadian and Asian corporate leaders, renowned business people and senior government officials.

The Goal.
The Foundation looks to deepen understanding and expand Canada-Asia relations crucial to Canadian growth and advancement.

The Challenge.
It was our task to communicate this goal through a beautiful floral table centerpiece. 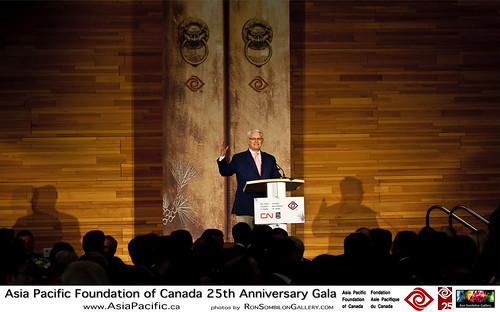 To show the relationship between Canada and Asia, we used Pine as the base greenery of the arrangement. Pine is found in most of the Asian countries as well as Canada. We then spent alot of time researching the national flowers of each country in Asia. After days of contacting various suppliers, we realized it was very possible that we could import most of these flowers. To tie all the elements together, we found an elegant bronze vase that matches almost identically to the tall Chinese inspired doors you see behind Premier Gordon Campbell.

We prepared a stunning sample for the Asia Pacific Foundation in early March, which they promptly approved. We then proceeded to place orders for all the different flowers we needed to import. The flowers came from all over the world, such as Singapore, New Zealand, Australia and Malaysia.  LanYan from Dalvey Orchid helped us to import lotus, acacia, and Vanda Miss Joaquim orchid from singapore. Kathleen from Proline trading helped us to import water lilies from New Zealand and dendrobium from Thailand. We also sourced as many local flowers as possible and even went to various greenhouses and farms to look for backup flowers.

We also proceeded to place a large order for the bronze vases we found and to our shock, our supplier in Toronto said they had been all sold out! By chance, we actually met the designer and manufacturer of the bronze vases while we were at the Christmas World International Event Decoration Fair in Frankfurt. We quickly called them long distance to Europe and they said they had discontinued that design and did not have any in stock. For over a month, we had looked everywhere for the bronze vases and with the help of our supplier, Jordana, we were able to locate just enough vases for each table. Thank you once again!

Our team of designers were incredible, as the flowers arrived just days before the event, everybody helped out and went above and beyond to ensure every detail of every arrangement was perfect.

Except for Fat Cat. He slept in our front window display all day long.

The national flowers of the Asian countries varied in colour from pink to yellow, there was no way that Amy would put yellow and pink in the same arrangement. We designed two arrangements with different colour theme’s, the one above was designed with pink cymbidiums (New Zealand), Cherry Blossoms (Japan), Hibiscus – replaced by Magnolia (a popular flower in Korea), Jasmine (Philippines and Pakistan), Lotus (India and Vietnam), Pink Peony’s (China), Vanda Miss Joaquim (Singapore) and amazing Purple Water Lily’s (Sri Lanka).

The water lily’s were one of the most beautiful flowers of the arrangement. But when we received them after importing them from New Zealand, they were all very closed. We had to accept the fact that we might not be able to use them and that we had just ordered over 100 stems of Water Lily for nothing. When we arrived at the store on the morning of the event, we were thrilled to see almost all the water lily’s had opened up!!!

We decided to go with a yellow themed tall arrangement for the reception counter as a preview to the beautiful Chinese inspired doors the guests would see in the banquet hall.

While guests are having a cocktail and mingling, a refreshing and simple cymbidium orchid provided a interesting talking point. 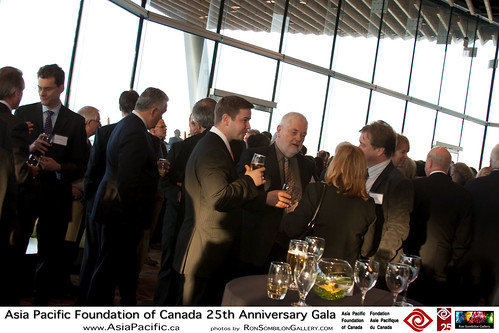 At the end of the event, the Foundation was to raffle off the table centrepieces in benefit of their Post-Graduate Research Fellowship Program. Of the over 30 floral arrangements we designed, all but 4 were snapped up. A beautiful end to a successful gala! 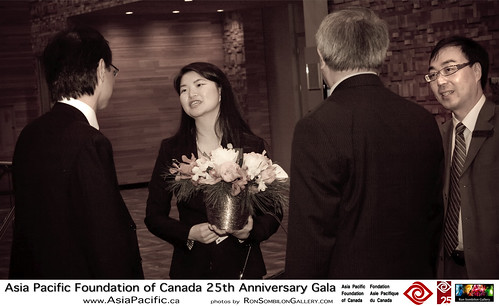